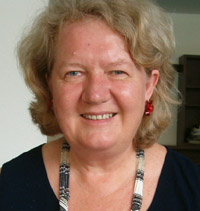 In love with the machine

And when I arrived at university I signed up for mathematics, to be a teacher. And this was the interesting bit, because towards the end of that year, our first year, we were told that there was going to be a computer science course as from the next year which would be a two-year major and we could start if we wanted to. And of course I was already in love with this machine up on the first floor of the physics block. And I signed up straight away. And there were nine of us in that first class, which was in 1970. So 1970 was the first class and I think it was also one of the first two in South Africa to run a full computer science course. And off we went. And I never looked back.

Bringing the Internet to South Africa

And another person who was in our group was Francois Jacot-Guillarmod. And he’s quite well known because he was one of the two people that started the Internet in South Africa. If I can just explain that. As you remember, the Internet sort of just came into force, in the early … late 1980s, early 1990s, during which time South Africa was not accepted by the international community in many ways. And they formed an alliance with a university in the US to do a direct link to them and from there to the Internet. So that South Africa was then connected in the academic world.

At the end of my four [undergraduate] years, Professor Braae said that he was going to a summer school called “Teach the Teachers,” which was to be run by IBM, and he was looking forward to that. He showed me the program and I said, “Well, oh! I’d love to go to that,” because it was these lecturers from England who were coming up courtesy of IBM to teach really interesting things in computer science. And he said, “Well, I’ll ask IBM if you can go.” And his phrase that he used then, which I’ve kept as a phrase ever since, was “Faint heart never won fair lady.” So he will ask, he said. So he asked IBM and IBM said fine, I could go along, although it was for lecturers not students.

Early use of the term Software Engineering

Well, it was very interesting, because I’ve still got the letter that I received from Professor Barron, David Barron, which would have been in about May, 1974, accepting me for going there. And he said, “We are a small group and we are investigating interesting aspects of software engineering.” And when I look back now, I don’t even know if that term had been coined in 1974. That’s a long time ago. But he used it in that letter.

And of course this was all pre-Internet time. And one of the people who was particularly up on the whole subject was Peter Poole from the University of Western Australia. And we used to correspond because he had a Burroughs running Pascal compilers. And I used to send him my programs by letter. It would take two weeks to get to Australia. He used to run them and send me back the output with annotations. Because I needed to know how that particular computer compiled the particular test program that I had.

{Question: Tell us about your early career in teaching} Well, remember we didn’t have the Internet. So there was no email. So your days were actually quite relaxed, if I remember our days were relaxed. We had lectures to give and we had tutorials to give. But when we went back to our offices it was quiet and peaceful. And we used to go to lunch and we used to go home at 5. It was actually a very quiet life in those days that we had, the expectations were perhaps lower.

Courses come in different flavors. There are the ones that you can present so well because you’re passionate about the subject. And then the other ones which are easier to present, because it’s easy, the work is easy. And of course, I suppose the one that has both of those is first-year programming. The huge disadvantage of that one for us is that the workload is very high, because you’re dealing with an enormously large class. You’ve got like three hundred in that course. So it’s a big problem to teach first-year programming. But you do know that you’re forming the minds of students for the rest of their lives, so that is very satisfying.

Don’t talk down to the students

Don’t talk down to the students. I think Dijkstra had the same. He said many teachers should be head up for — what was the word he used? — anyway, for abusing the minds of the students. Don’t give them stuff that they’re going to have to relearn later; give them it correctly the first time. They don’t have much time, especially those students who are not going to be majors with you. Don’t give them simple, simple, simple. Give them the real stuff, as the physics people do, as the chemistry people do. Give them the real stuff. And so when I see very poorly written programs in introductory books on C — with if statements going if, if, if, if, if — I really feel we’re doing the community in. And so I would rather just take it from a higher level, explain it well, and give them something that will last a lot longer.

I have been lucky in that I have been able to keep abreast of technology because I’ve been involved with companies. So, in particular, in 2002 I received a grant from Microsoft. It was a competitive grant, a worldwide competitive grant. There were only 42 given out of more than 100 applications. And from that, I then became involved with Microsoft Research, which is a wonderful, wonderful organization with some of the brightest minds on the planet. And I went and worked with them for 5 months. And then they invited me to lecture on their academic lecture circuit in Europe. And I went all around Europe, traveling, meeting people, meeting people from all different countries, seeing how they operated. But always in this sort of more mixture of research and teaching than one tends to find at SIGCSE conferences. So that was very stimulating. And through the Microsoft push, I got to hear about new things in advance and be almost forced to know about them. Because people would ask me, “Oh, you’re with Microsoft, can you tell me about this new Microsoft thing?” I had to have an answer ready, which meant I had to swat it up. And I couldn’t be clueless or say, “Oh, well you know, that’s just technology!” And I now have great respect for what any of these big companies does. Not just Microsoft, I am sure the same is true with IBM, with Sun, with Apple. If you manage to get in with one of them and learn about the technology at a very intense level, it’s hugely worthwhile.