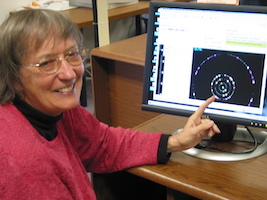 There’s one important event that happened here. Right after high school […] I had the opportunity to go to a National Science Foundation Summer Institute for high school students. It was, I think, juniors and seniors. [… T]his was in the Sputnik “we’ve got to have more scientists and engineers to beat the Russians” and Cold War type of mentality. There was a sense of urgency there. And so, in that program I … took some science program … but I also had a computing course. So, this was in 1961. And … the Summer Institute courses were taught by regular college professors, and they were … not dumbed down, but … shorter courses and geared toward … getting high school students interested in math and science. And we basically learned how to program an IBM 650. So, there were about, maybe 10 students in this class. And this was, you know, at the very beginning of time with respect to learning how to program. I don’t even remember what language it was, but it was probably a Fortran or a Fortran dialect. It might have been assembly language. But we had to program a few loops. And that really drew me in. That was a moment where I got hooked because just the sense that you could program a loop that could do an array of any number, any size, any number of numbers, just seemed to be such a fantastic thing. And, though I didn’t realize it as much at the time, but the other side of that question is: “So you can add up all the numbers. How do you know you’ve got the right answer?” Which became the basis for my later career of program correctness.

Summer jobs and a seminal paper

[A]t the time that I was at Duke I had a couple of summer jobs. One was at SofTech with John Goodenough. That turned out to produce a paper that really brought a lot of attention to my career. It was a seminal paper. It wasn’t all that earth-shaking, but it brought together a whole lot of ideas, so that was on program testing. And program testing kind of fit in with correctness. They were thought to be opposing … ways of doing things and I tried to bring them together.

The basis of a software engineering curriculum

And I went … had a contact, Nancy Martin, at the Wang Institute of Graduate Studies in Massachusetts. And so I ended up on the faculty there for three years. So that was … that was a good time. Also, because this was a Master’s of Software Engineering program. There wasn’t a software engineering curriculum … you know, who knew what you taught in software engineering. There weren’t any books. We collected papers and used the papers and developed the courses and much of that curriculum later became the basis for the Software Engineering Institute curriculum.

The importance of big enough projects

But, you know, the thing I think is lacking in many curricula is there’s just too many … small exercises. And you have to have a big enough one to really teach you the complexity, the hardness of the complexity issues, as well as to develop your confidence. So, once you know that you can start a project, and you’re going to get into it and it’s going to get horrendous, but you can … you have to figure out then how to deal with those problems and you can believe that you can get to the end of it so that you don’t stop. So, I believe students need to be given experience where they get into the messes and have to deal with the complexity and make mistakes and fail.

[A]fter basically becoming legally blind in 2006 and fumbling around with a lot of the … computing technology that was available, in 2007, I started writing a blog and I thought, “Now … I’m representative of someone who is very tech savvy and I’m willing to … pay for the equipment that I need to keep me going, but I’m not a part of the regular rehab system.” … I’m on my own, basically, learning on my own … So … as I’ve been trying out different software packages … I’d write up these … little things, kind of thinking of myself as being an advisor to the baby boomers who were going to be losing their vision, want to maintain their technology communication abilities as much as they can, but are not going to have the rehab services … And my tag line is ‘adjusting to vision loss using technology with class.’ And looking at this as an ongoing process of how I change. The blog is not just about technology but is also about a few of the heroes that I’ve found, that are writing books or providing material. And they inspire me. So, I write about them and I write in a more personal vein than I would if I were doing this … this is not technology papers.

Ending as a trouble-maker

But these things happen, and when you stand up, you’re a troublemaker. And you are a troublemaker because if you didn’t stand up there wouldn’t be any trouble. … I had to decide to what extent I would put myself on the line. If you’re at the end of your career … you can stand up and do things you could not do earlier and, furthermore, you know better. You … just have the past history, you say, ‘This has got to change and I’m going to see what I can do to make it change. And the harm that might come to me, because I’m at the end of my career, is not as significant because it’s just got to change. And so the benefits … if I don’t stand up now against this, then this will go on.’ And it’s not just me alone standing up against it, but others … who are also willing to put themselves on the line …, not just one person, but a group trying to make it change. And it’s painful, but it happens and at the end of your career you can take some chances you wouldn’t otherwise.