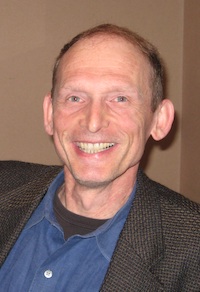 Teaching inspiration based on the null instantiation of for all

I loved his [Dan Friedman’s] kind of research, the way he did research. He’s the one that I owe the entire inspiration for teaching. I did not think I would be a teacher. I thought of myself as a researcher, very competent in mathematical things. I saw myself in a research lab, or maybe in industry. He said to me after I had committed to do research with him in that first semester there, “All of my students have become professors.” What I failed to check was that, yes, it is a true statement. But the for all quantifier can be instantiated with zero. He had never had a student before. So his dream was that all of his students would become professors. And yes, I did become a professor. But that one remark inspired me to think really about a professorship.

Dan [Friedman] wanted his students to be teaching assistants. Even if he had a grant, he wanted us to go through teaching his favorite course — programming languages for undergraduates. It was a radically different course than everybody else’s course at that point in time. So he took me for his course, I was his TA. So I had taken it first. I was his TA. And as I was his TA, I would realize how much the students misunderstood initially, for the first third of the semester, what he was teaching them. And not enough of them were really understanding what was going on. For the first part, for the first two weeks of this course, he used this book called The Little Lisper. It was a very thin, green book he wrote in two weeks on a typewriter at the University of Texas in Austin. And I would explain to him how my mathematical understanding of certain things just didn’t jive with The Little Lisper and his book was misleading students in doing the wrong thing. I did this verbally in class, as opposed to privately one-on-one. And so we had these discussions in front of undergraduates until he one day said, “You come along.” He took me to his secretary, handed me 300 pages of attempted re-writes that he had made for this book, and he said, “Re-write it any way you want, but don’t ever come back to class.” Which was a fantastic job, so he taught me to re-write his book. And I rewrote his book. That’s how I became involved in book writing and really thinking about how to get students to go from a problem statement to a natural solution. That’s the beginning of [our book] How to Design Programs.

Hiring vs. working together with Ph.D. students

[I]t got me closer to a friendship level with my advisor, not to a pay relationship. Because of that, I’ve never had a relationship with my graduate students where I said, “I hire a graduate student.” I never hire a Ph.D. student. They come to me. We work together. It is my job to raise enough money so they have bread, water, a mattress, and maybe a roof over the mattress. But at the same time I get them through and I see them to tenure.

If you can’t fail, it ain’t research

So here I was, one-and-a-half years into my Ph.D. studies, and one 10-character equation on the board inspired me to look into certain things. And, believe it or not, within a year I had written four or five major papers on that stuff. It turned into a new, novel theory of semantics. And my dissertation was more or less done. It was such a coincidence because it used to be lucky to finish a Ph.D. in 3 1/2 years, but it was another one of those insights where you see an advisor throwing ideas every day and one in a year works out. But I was lucky enough to be there when he had it. So that’s another insight on research. Research is when you have lots of ideas, many of them fail and if you can’t fail, it ain’t research. But if you have one, run with it and work it all out.

[Describing the beginnings of the TeachScheme project] It was [like a time in a start-up]. When people create a start-up they have, as Paul Graham put it one day, “the agony of a lifetime packed into three or four years.” We did that, too. But it wasn’t a commercial start-up, it was an intellectual start-up. It was a very, very intense time, being there all the time for our software, for our teachers. Working on the curriculum. Working on the IDE. Working on the programming language. Working the mailing lists. Recruiting people. And raising money, in my case, trying to attract funding agencies, the foundations. Presenting my work. Trying to get the money to get my Ph.D. students through their studies and getting them a Ph.D., too — a technical Ph.D.

Tenure is syntax, the real work is semantics

I did tell Ken Kennedy when he hired me that I considered tenure syntax and my real work semantics, meaning I wanted to see tenure and all those things as things you don’t really care about, something you have to do but it is not what matters. What matters is good results, good impact on the people that you are with. He said it was the first time ever that somebody had said this to him, but he hoped it would work out for me. And it did. So I worked only on problems. I only focused on my graduate students from Day One. I love teaching in the classroom.

We have a conjecture that girls prefer to follow rules and boys prefer to play Game Boy. What that means in terms of programming, in learning to program: programming has only rules in the traditional way in syntax. You play until you parse it, until your program goes through the parser. It’s more or less like playing Game Boy. A parenthesis here, a brace there, a semi-colon over there and voila! your program goes through the parser. Isn’t it fun! And nobody has actually any method to check whether this is a good design or a bad design, so at that point the program runs, you tweak it, and it’s done. That’s a good boys’ game. Girls, on the other hand, seem to be much more interested in having a fixed set of rules for a game. Design rules, design recipes offer that, after the syntax. Our syntax is extremely simple. It’s not the obstacle at all. It’s design, rational design.

Get everybody to see the beauty of computing

But all the people who get regular As or A-minuses or maybe B-plus, we found a lot more females were performing at that level than boys. The boys split radically. They didn’t want to follow rules. They didn’t want to have good design. They just wanted to have something done. It’s a conjecture. We had no sociologists on our team confirming that and it isn’t my primary interest. My interest is to get everybody to see the beauty of computing.

I’ll teach until I can’t anymore

[A]fter I had coached these kids for an hour-and-a-half every day, sometimes in the morning, too, I would go in the pool and swim. I stuck to this swimming for almost thirty years now and I finally gave up because just doing the butterfly for thirty years eventually damages your shoulder. So that’s one of the things: I did it until I couldn’t do it anymore. And I will teach until I can’t do it anymore.

Computing for all high school students is my hope

My hope is … my professional hope is that many high schools have almost all their students in a course on programming, computing, that helps these students strengthen their math skills. That’s the central thing.

Computer science is not about mathematics only

There are these stories around where I was really harsh on people because I believe in tough love. I have undergraduates who flunked or nearly flunked courses and they thanked me. They sent me thank you notes afterwards for giving them an F. Two of them in particular, I keep those forever. They are posted on my message board. Their thank you notes basically said, “I took this course as the capstone course of my career at Northeastern, and I was supposed to take a job, and getting an F made me realize I wasn’t prepared. And best of all, I had to go back. My coop job had actually offered me to continue on my position.” They are almost identical stories, both of them. Both of them wrote back, “As I looked at my work, through the eyes of this course, I realized I wasn’t ready. And I am going to go back and make sure that I understand what you tried to teach us.” That kind of impact, that if you get an F from me, you still you think saw something new, and it will change how you deal with your professional life is a good thing.